Nice day for a walk

It's ironic, given that title, that I haven't had time to get out of the office today. Yesterday, though, I went out for a while to see if I could find spring. These photos won't look especially springy considering all the snow that's still out there, but the melted-out tracks show that it's coming. 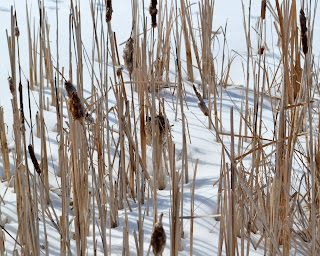 I caught a glimpse of one of last year's Red-wing Blackbird nests amongst the cattails on the West Gaetz Lake. It seems hard to believe, but it won't be too long before the blackbirds are back at our feeders. 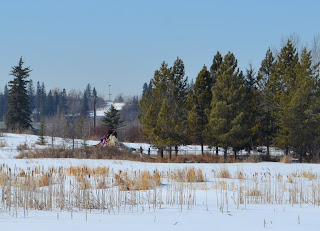 The Nature Nursery kids were having some fun playing on the snow pile beside our staff parking lot. 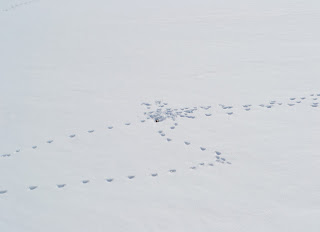 If you look closely at the centre of this shot, you'll see the hole in the lake ice amidst the tracks. 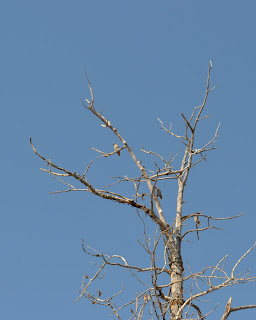 When there are lots of Waxwings around the trees almost look decorated. How many can you find in this picture? I see four, but there may be more than that. 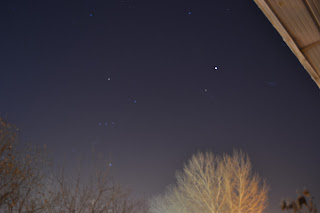 This isn't a Sanctuary photo (obviously), but it is a reminder that it's worth looking up at night even in the city. Last night from my balcony I was able to find the constellations Orion (to the left, with the line of three stars for his belt) and Taurus (the v-shaped Hyades cluster as the bull's head, the two "horn" stars above, and to the far right the Pleiades cluster that makes the bull's shoulder). The bright "star" above the Hyades -- the brightest thing in the shot -- is actually the planet Jupiter. This was taken after 9:30 pm looking WSW. Why not try having a look for yourself on our next clear night?

Our next Family Planetarium show isn't until April 14th, but if you're looking for some fun before then don't forget about our Easter Spring Fling on (oddly enough) Easter Sunday. There are crafts, activities, prizes and a nature egg hunt. It goes from 1 - 4 pm on March 31. Give us a call at 403-346-2010 for more information.
Posted by Diane at 1:49 pm