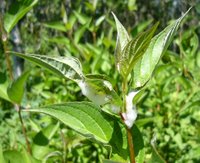 Keen observers might notice that some of the plants beside the Sanctuary paths look like someone's been rather rudely clearing his throat onto them. The fact is that we really don't need to be putting up "No Spitting" signs -- what looks like spit is actually the home of the nymph of the aptly-named Spittlebug. The foamy covering the nymph produces helps hide it and protects it from predators.

I was able to get out for a brief walk on the Dr. George Trail this afternoon, and it was interesting to see that even in the hot, muggy weather we've been having things were still pretty busy in the grassland. In the grassland, she says? Well, yes. I know it can look like one of the blander parts of the Sanctuary, but this time of year it's actually got quite a lot going on. You just have to look at things on a smaller scale.

The goldenrod, asters, and (sigh) thistles have brought out the butterflies in decent numbers, for one thing. I'm not at my best with butterfly IDs, but even I could find wood nymphs, sulphurs, and fritillaries darting from flower to flower.

This is also grasshopper season, and while grasshoppers may not be appreciated in a crop I find it a very summery experience to walk through the meadow and hear them buzzing.

I suppose all this is by way of saying that even when the large animals are off in the quiet and shade of the forest, there's still a lot of life to be seen if you take a moment to look at things a little differently.

For those of you interested in the state of the Red Deer River - and other rivers in the Red Deer River Basin - I've added a link to the Alberta Government's river basin information map. It's located just to the right of the page in the sidebar.

For example: by selecting the Red Deer River Sub-Basin and selecting River Flows and Levels, you can generate a graph that shows historical and current streamflows for the Red Deer River. This is particularly helpful for getting an idea how fast or deep the river is running before you plan you canoe, kayak or float trip on our rivers.

The photo below is a snapshot of a typical streamflow graph. 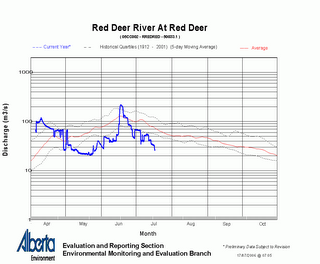 I haven't posted any spider pictures lately, so here are a few in one go. As always, just click on the photo to enlarge it. 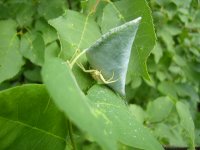 I was lucky enough to snap this shot yesterday when I was out on the Dr. George trail in the Sanctuary. It's a female Goldenrod Spider (Misumena vatia) defending her egg sac. These spiders are ambush predators and don't use webs for catching insects, but they do use silk to wrap up the leaf they've chosen to cache their eggs in. This crab spider will spend the rest of her life defending her egg sac; in fact, she's likely to die of starvation (or exhaustion) before the spiderlings hatch out. 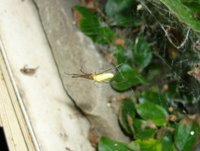 Earlier this week I had a chance to watch this spider at work beside my father's fish pond. It's a Long-Jawed Orb Weaver (Tetragnatha sp.). The Long-Jawed Orb Weaver builds a typical-looking orb web, but it's often on a bit of a tilt and has the middle hub removed so that the spider can cross from side to side. Long-Jawed Orb Weavers can be found near wetlands (amongst other places), and will stretch out their long, skinny bodies to camouflage themselves in the reeds. This one didn't have any reeds nearby to hide in, but the cotoneaster leaves in the background should give you an idea of its size. 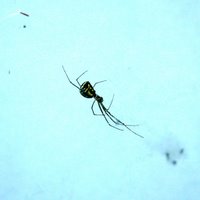 Since I was planning to post the first two spiders, I thought I may as well include a photo I took last week too. It looks a bit less than natural compared to the other two, but that's just because I sneaked a piece of paper behind the spider so that its markings would show up better. It's called a Bowl-and-Doily Spider (Frontinella communis) and is a member of the Linyphiidae or Sheet Weaver family. The web this spider builds is quite remarkable. The top part looks like an upside-down bowl, and it's suspended above a flat-sheet "doily". The web isn't sticky, but is enough to hinder any small insects that fall on it long enough for the spider to bite through the web and drag its prey under. The Bowl-and-Doily Spider's markings often look a bit like a cursive "mc".

Each of these spiders is harmless to humans, as are the vast majority of spiders here in Alberta.

We don't have a resident spider expert at the Nature Centre, but if you have spider (or other) questions please don't hesitate to give us a call. We'll do our best to see what information we can find for you.
Posted by Diane at 2:15 pm 0 comments 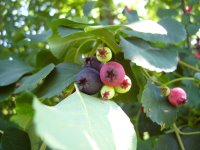 I grew up helping my grandmother pick saskatoons (Amelanchier alnifolia) for pies and preserves, and even though I rarely do anything with them but eat them straight off the bush these days I still look forward to berry-picking season.

That's funny, actually, because saskatoons aren't really berries. They're technically known as pomes, and if you had the patience to dissect one (rather than just eat it) you'd find all of the same structures inside a saskatoon as you do in an apple.

Judging by the looks of the earliest-ripening fruits, I'd say that our saskatoon season is going to be a decent one this year. Which brings me to the reason for this post...

If you had planned to come to the Nature Centre to walk in the Gaetz Lakes Sanctuary with your berry-picking bucket, you might do better to leave the bucket at home and just go for the walk. While we don't mind visitors sampling one or two saskatoons as they go, we'd prefer that most of the pomes in the Sanctuary be left for the many animals that depend on them.

Also, a reminder to those who like to collect saskatoons and other fruit from the bushes along 45th Avenue on the way to the Nature Centre: please take extra care to park your car safely. The road's fairly narrow, and over the years I've seen my share of near-misses on that stretch during picking season.

Happy (and safe) harvest, everyone!
Posted by Diane at 1:40 pm 0 comments