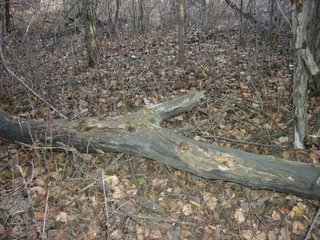 Woodpecker holes on a fallen log.
Posted by Diane at 12:35 pm 0 comments

Not all evergreens have needles 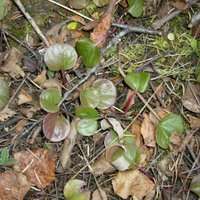 Sharp-eyed visitors to the Sanctuary this time of year may notice the occasional patch of plants that hasn't turned brown with the coming of the cold temperatures. In this particular case the plant in question is Pink Wintergreen (Pyrola asarifolia).

While this wintergreen isn't the wintergreen used to flavour gums and mints, it has historically been used to ease toothaches, calm sore throats, and even stop or slow down bleeding.

Pink wintergreen can be found on the floor of moist conifer forests in central and northern Alberta. The small, round, leathery leaves appear to grow stemlessly from the ground. As the plant's common name implies, the leaves tend to stay greenish (but tend toward red in the winter) throughout the year. Each plant sends up a flower stalk in early to mid summer. The pink, cup-shaped flowers are attractive but easy to miss amongst the forest floor litter.
Posted by Diane at 1:14 pm 0 comments

On the Wishart Trail 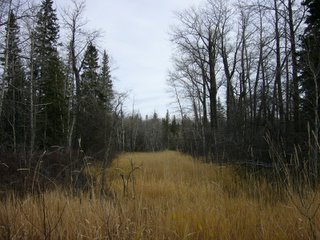 A look at part of the abandoned river channel. Obviously this picture was taken before our recent snowfall...
Posted by Diane at 12:55 pm 0 comments 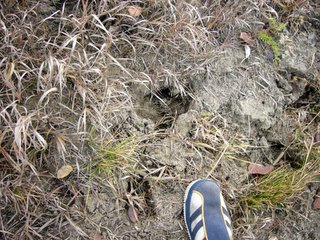 It's not too hard to find moose tracks along the trails at the moment. My foot should give you a sense of the scale of the tracks here (sometimes you just have to work with what you've got...).

Even though we're probably past any dangers from this year's rut, animals in the Sanctuary should always be treated with caution. Wild animals are called wild for a reason, after all.
Posted by Diane at 11:14 am 0 comments