We are a Leader in Renewable Energy 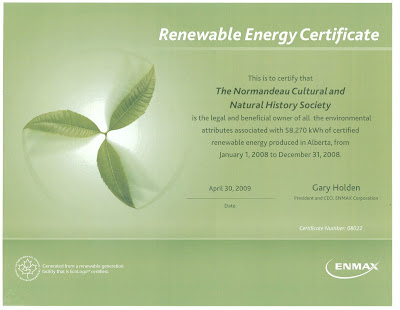 The Kerry Wood Nature Centre has just been recognized by ENMAX Corporation as a consumer of renewable power. In 2008, the Nature Centre consumed 58,270 kW/h of electricity generated through the ENMAX Green Max program - largely from wind-generated power.

One the power generation side, we are creating electricity through a photo-voltaic system. There are currently 40 solar panels on the roof of the Nature Centre, tied to two of our four installed inverters. The Centre’s solar-power consultant is currently sourcing another 20 panels. They should be installed by the end of 2009. The system has capacity for 80 panels. We are currently fundraising for an estimated $15,000 for the remaining 20 panels.

The PV system supplements the electricity coming in from the grid, ensuring we get some of our power from a renewable, non-carbon-based source. Click here for an up-to-date snap shot of how much power we are generating for ourselves.

When the phase one of the grid-tied PV system was installed in 2004 it was the first of its kind in the area. Gordon Howell of Howell Mayhew Engineering and The City of Red Deer’s Electric Light and Power department worked together to build a framework that would allow others to install similar systems, giving rise to the Net Zero homes in Red Deer’s newer subdivisions 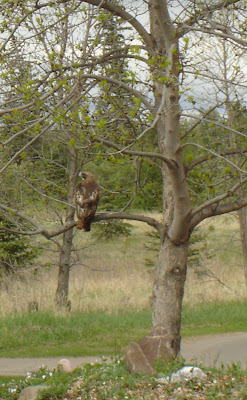 This Red Tailed Hawk paid us a visit this morning. The tree he's sitting in provides an excellent perch to look out over the wildflower gardens and the surrounding grasslands. There are lots of Richardson's Ground Squirrels for hungry hawks to feed on, in the area surrounding the Nature Centre.
Posted by Todd at 10:41 am 0 comments