See? We can be found after all!

Big 105 tweeted that they were delivering Slurpees.Of course we tweeted back that we'd like some. The result? 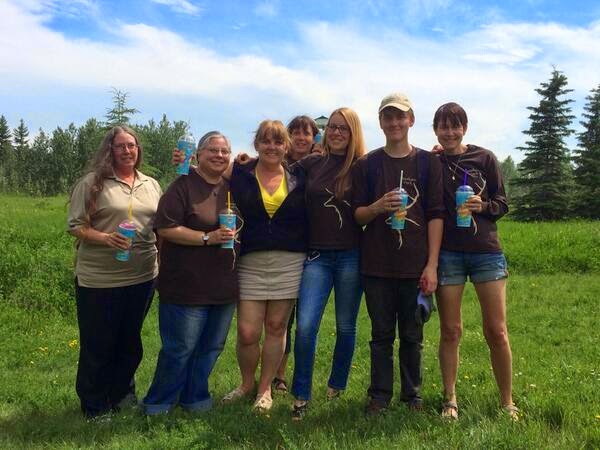 Guess we're findable even with the construction. Thanks for the treat, folks. It's a great day for it!
Posted by Diane at 3:15 pm 0 comments

Above the posts on this blog you'll see a tab called Find Us that shows a Google map and gives directions to Kerry Wood Nature Centre.

It's a bit more complicated than that at the moment.

Road construction on 55th Street means that you won't have direct access to the Centre if you're coming from the west. There are a couple of ways to get around this, though. If you're on Gaetz Avenue southbound, continue on until you hit 49th Street (sometimes thought of as Ross Street eastbound). Right now you can get to us via 45th Avenue going past Coronation Park, but if you're concerned about that being blocked by construction or don't know the city very well, continue going east until the next major intersection (40th Avenue) and turn left. 40th Avenue takes a curve and becomes 55th Street. From there, you should be able to get to 45th Avenue (via detour signs, if they've got any short-term blockages). Turn right, and follow 45th Avenue as usual.

Doesn't taking the bike paths sound like a much easier alternative? You can get to us via the South Bank Trail. We have a bike stand and a convenient repair stand as well if you've had any trouble along the way.

Don't forget -- we're still here even if construction makes it harder to get here. We hope to see you soon!
Posted by Diane at 11:29 am 0 comments