First, our thanks to everybody who attended and/or participated in this past weekend's FortFest at Fort Normandeau. Once again contributions from our volunteers, the Firestick Society, the Red Deer aboriginal Dance Troupe and the 65th Mount Royal Rifles Commemorative Regiment were invaluable and, as always, entertaining.

Aside: If anybody atteding FortFest on Sunday got a photo of the outstanding smoke ring created by the 65th's cannon, please get in touch with us. We'd really like a copy of the image.

In the "Seen in the Park" vein, we had one of the areas neatest and more secretive insects brought into us last week. The critter below is an Elm Sawfly, Cimbex americana. While it's somewhat ferocious looking - especially when it's held in an outstretched, empty Gatorade bottle - this large insect is completely harmless. It is a hymenopteran like wasps, bees and hornets, but sawflies have no stinger. If you're really diligent and somewhat lucky, you can find Elm Sawflies resting in the summer sun on the branches of willow, elm and poplars; often along watercourses.

Due to the significant damage they cause to their host Elm trees, Elm Sawfly larvae are considered an agricultural pest. 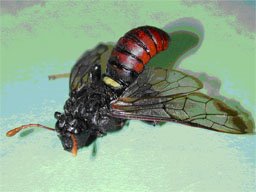 Links to this post
Labels: animals, programs and events
Email ThisBlogThis!Share to TwitterShare to FacebookShare to Pinterest

New at the Centre 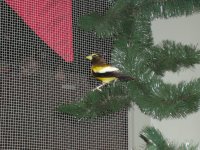 The latest addition to our critter collection at the Nature Centre is currently making himself at home in the bird cage. The Evening Grosbeak was brought to Medicine River Wildlife Centre with a wing injury, and since he was non-releasable he'll be living here at the Nature Centre. He's really a beautiful bird, and I hope everyone will drop by to have a look at him. 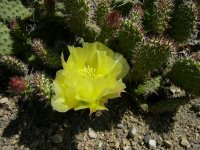 If you do come down to the Nature Centre to visit the Grosbeak (or look at the displays or take a walk or browse the bookstore...), be sure to take a moment and look at the Prickly Pear Cactus bed beside our back door (the staff entrance). The cactus flowers are just starting to come out, and when the whole bed's in bloom the waxy-looking flowers make for quite a show.
Posted by Diane at 3:55 pm 0 comments 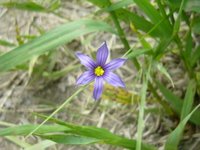 Sharp-eyed park visitors may find that some of our grass seems to have very ungrasslike flowers. The truth is that the flower is not actually on a grass, but on a member of the Iris family known as Blue-Eyed Grass (Sisyrinchium montanum) because of its grass-like leaves.

You may not even notice Blue-Eyed Grass flowers at first because they're not very big and tend to blend into the surrounding grass fairly well, but once you've spotted your first flower you'll start to find them on the grassy edges of paths throughout Waskasoo Park.
Posted by Diane at 4:05 pm 0 comments

The University of Alberta's Peregrine Falcon Webcam is showing that the Peregrines on the Clinical Sciences Building are currently incubating four eggs. The eggs should hatch mid-June.

The images on the webcams update every fifteen seconds. It's worth a look!
Posted by Diane at 4:25 pm 0 comments 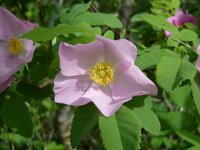 If you were to go for a walk on the Dr. George Trail today, I don't think you'd be able to not notice the start of the wild rose bloom. Rosa acicularis is, of course, Alberta's provincial flower, but it's also one of my personal favourites. The wild rose may not be as showy as a hybrid tea rose, but it's hardy, fragrant, and actually has a very high nutritive value. In a few days' time the walk towards the bird blind trail should smell better than any perfume counter.

Right now, though, it smells more like somebody mixed up far too many perfume-counter samples at once. The culprit isn't the roses, but the small yellow flowers on the Silverberry (better known to some as Wolf Willow) bushes. 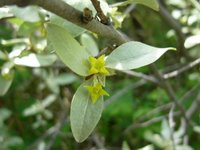 It's hard to believe that the Silverberry's tiny, nearly inconspicuous flowers can raise such a big stink, but there's a pretty good reason for it. The plant depends on insects to pollinate its flowers, and scents are quite effective at attracting them. Generally speaking, sweet smells attract bees and butterflies, while rotten smells attract flies.

Many people like the smell of Silverberry, while others find it a bit on the overpowering side. Count me in with the latter group, I suppose, but I'll be happy when the Silverberry's done and the roses are front and centre.
Posted by Diane at 11:27 am 0 comments