Busyness in the Sanctuary and mystery spiders

I was out checking the Dr. George Trail in the Gaetz Lakes Sanctuary this morning when I heard a tapping that made me stop for a moment. It was a Downy Woodpecker foraging in the trees, and I decided to watch it for a while. I suppose I was standing still enough not to be noticed much, because before I knew it I was in a whirlwind of bird activity. Chickadees, Goldfinches, Yellow-rumped Warblers (I was actually kind of proud of myself for recognising those. I'm not much of a birder) and assorted LBJs (Little Brown Jobbies. Handy technical term, that) were all very busy in amongst the poplars. I even managed to end up in the way of a sudden Red Squirrel fight. Apparently somebody was in someone else's territory, and the someone else was pretty quick to let the other one know.

It was a nice, far-from-quiet moment, and the neat thing about Red Deer's park system is that you don't have to be in the Sanctuary to have moments like that. Our city trails are home to an amazing amount of wildlife, and you only have to be willing to slow down and listen to find it. I'm always amazed at the the things people will miss just because they're in too much of a hurry to get to where they're going. The next time you're out for a walk, why not take a minute to be still and blend in a bit more? You might be surprised at what's out there. 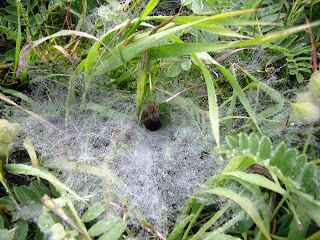 It's true that Hobo Spiders make funnel-shaped webs, but they're not the only spiders that do. The photo above (click on it for a larger view) shows a Grass Spider (Agelenopsis sp.) on her dew-covered funnel web. These spiders are very common along the trails in Red Deer, and they're nothing to be worried about. They're shy spiders which will retreat to the bottom of the web whenever possible and are very unlikely to bite a person.

Another funnel-weaving spider that you might notice is the common European House Spider. As the name suggests, these spiders are accidental immigrants to Canada. You can sometimes find their funnel webs in undusted corners. Again, they're very unlikely to bite a person, and unless you happen to be allergic to spider bites a bite won't give you much more than an itchy bump for a day or two.

For the Lack of a Camera

Normally I wouldn't advocate peering out your side window (instead of watching the road) while driving. However, on my way to the Nature Centre after lunch today, I had a pair of White Pelicans flying along at treetop level. Considering the trees are growing up from the level of the river bank, that put the birds basically at eye level for me. They were easily keeping pace at about 40 km/h for a few hundred metres. Maybe they were racing.

Anyways, I had no camera with me and even if I did, even I wouldn't try the photography/driving combination.

The pelicans we have here are apparently younger, unattached males who live separate from the breeding colony that migrates farther north. They're basically teenage boys. They've got the size and colouration of the adults but none of the social skills.

And, they're big. Last week I sat in a kayak and was within a paddle's length of Bald Eagles, swooping down out of the trees to grab fish from the ocean. Trust me, Eagles are big. They're a significantly huge bird. However, these adult-sized Pelicans are another thing altogether. With a body that's double the size of the eagle and a wingspan that can be up to a metre longer, these are massive animals.

And yet watching them glide up and down the river, pivoting tightly within the confines of the banks and trees and then gently touching down on the water, they're incredibly graceful. If you have a chance to spend some time near the river over the next few weeks, bring your binoculars and your camera. They'll probably be gone in a month or so; migrating back to the Sea of Cortez, the Baja and the Gulf of Mexico for the winter.
Posted by Todd at 3:58 pm 0 comments

The Green Sound of Silence

There was an amazing thunderstorm here a few days ago. The lightning was almost continuous, the rain was torrential, and the power was off for almost an hour (at least it was at my house).

Thunderstorms like that don't scare me. In fact this one, with its lengthy late evening power disruption, gave me ample time to reflect. And in my relaxed, reflective state I came to a startling revelation: nowadays, there is rarely an opportunity to enjoy true silence.

Think about it. When was the last time you experienced true silence? I'm not talking about the silence that comes when you've stepped outside the office for a quick breath of fresh air or turned your computer and cell phone off for the day after the kids are in bed. True silence does not exist in those scenarios: the traffic still flows by and the fridge is still buzzing. I'm talking about silence like people used to know it: no power lines, no traffic, no endless EMF generation. It's the kind of silence that can only come from nature; from immersing yourself deep in a forest or, in my case, enjoying a late night power outage. And it was refreshing.

We need silence. Noise is stress and silence is the cure. So if I have learned only one thing from this experience, it is this: we need to make room for silence in our lives.

An added benefit is that, in order to create silence, we need to do one of two things. One, we have to turn off all of our gadgets (at least for a little while) or two, we need to get out into nature. We can do both, of course, and save a bit of energy while we're at it. Think of it: if all of us dedicated just one afternoon a week to creating and enjoying silence, we would be calmer, more balanced, and working to save the planet in the process. It's a win-win, really. 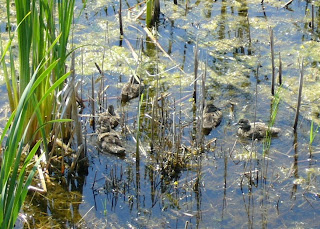 Ducklings on the West Gaetz Lake 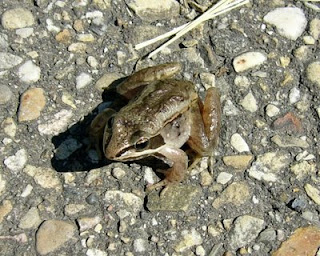 Wood Frog. I'm not sure what this little frog was doing on the path in the middle of a hot day, but wood frogs in general can often be found away from water this time of year. You can tell it's a wood frog by (amongst other things) the black "Lone Ranger" mask around his eyes.

As always, click on the photos for a larger version.
Posted by Diane at 3:05 pm 0 comments 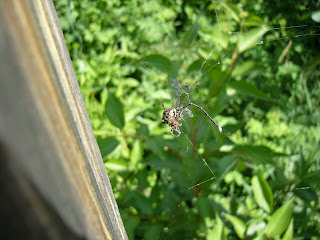 Sorry for the slightly silly post title. This is just a good time of year for those of us who like spiders, that's all. Keeping your eyes open for webs in the trees, in the grass, or even, as in this photo from last year, on the viewing decks can lead to some interesting glimpses of the goings-on in a spider's life.

This is also the time of year that we start to have a lot of spiders brought into the Nature Centre for identification. Many of the female spiders are getting ready to lay eggs and are looking a bit big and scary. The good news is that we have very few spiders in Central Alberta that can give much of a bite (to humans, that is. It would be a different story if you were an insect), and even those that can aren't likely to bite without being provoked.

The spider we get the most questions about in August is a large orb weaver called a Jewel Spider or Jewelled Araneus. I posted some information about these spiders a few years ago, so rather than repeat myself I'll just direct you to that post here. The important thing to remember before you reach for the pesticide is that even though they're big, Jewel Spiders are fairly shy spiders that aren't likely to bite. As a bonus, if you have Jewel Spiders -- or any spiders, really -- around your house, you'll have much less of an insect problem than you might have otherwise.
Posted by Diane at 12:15 pm 0 comments Great Blue Heron on the West Gaetz Lake. Sorry the shot isn't clearer -- my little camera doesn't have much of a zoom.
Posted by Diane at 11:47 am 0 comments