For spider questions, that is. Many of the female spiders are becoming larger and more obvious as they prepare to lay eggs, and this leads to an increase in spider calls to the nature centre. 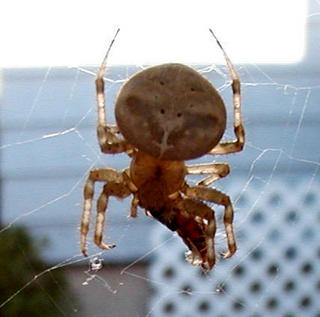 We usually get the most calls about this particular species. It's a Jewel Spider or Jewelled Araneus (Araneus gemmoides), and it's one of the biggest spiders in Alberta. The abdomen of a female can easily be as large as the tip of your thumb.

Jewel Spiders are most easily identified by their size and the two large bumps on the top of the abdomen. They're sometimes known as Cat Spiders, since some people see the image of a cat's face in the abdomen's patterns.

Jewel Spiders are in the orb weaver group, which means they build a classic flat web. The webs are often found in areas that get evening light, like a porch or window frame. Moths and other insects attracted to the light end up getting trapped in the orb web. A pretty neat hunting trick.

If you find a Jewel Spider on or near your home, the most important thing to remember is that they're actually quite harmless to humans. In fact, they're fairly shy and will do their best to retreat as long as they're given the opportunity. When you stop to think about it, spiders like this are doing us a service by keeping the local insect population in check.

For more information on this and other local spider species, look for Marianne and the Kerry Wood Nature Centre's display at the flower show at Parkland Nurseries on Saturday, 20 August 2005.
Posted by Diane at 1:40 pm

Labels: animals
Email ThisBlogThis!Share to TwitterShare to FacebookShare to Pinterest

Wow, your information has been so helpful..I can sleep easy knowing that this monster outside my front door is almost completely harmless(to humans that is)

Thank you so much! We were worried sick weather or not we made the right decision not killing this THING that was just kind of hanging out our front door since it looks pretty poisonous, but my goosebumps have retreated and I feel much better now.

GREAT info, we LOVE our jewel out side our living room window, she is HUGE and an absolute beauty. We have enjoyed watching her in the evenings what WONDERFUL entertainment

Harmless or not, it gives me the creeps and I want it dead! How do i kill it?!

Well, I was quite creeped out by these at first but realized they were probably quite harmless. However by leaving them alone, they managed to multiply into quite the colony in just a few years. Since we tend to be night owls, they have quite the feast late into the night by our windows since we live in the country and don't need much for window coverings. They grew very big this summer and were taking over the deck. So we relocated them to the back of our acreage and vowed to keep the growing numbers in check.

My husband used a saddle. Its was quick swift and horribly terrifying. Left a massive splat outside our window. I call him the dinosar spider cause i thought no insect gets that big without living for a really long time. Gross! I was more afraid of it getting in and eating my family! Heeeell no! It didnt stand a chance against this mama bear! Ps my husband was very brave when he sqaushed him even thou he screamed louder then i did lol. Good luck :)