I'm beginning to think that I could title pretty much every post "Snow" for the next few months...

I took a  quick walk yesterday to get out of the office for a bit, and let me tell you the obvious: the snow is deep out there. If you're interested in doing the Sanctuary trails (which are ungroomed) I really would recommend renting a pair of snowshoes because the footing isn't very easy otherwise. Our staff can give you a quick tutorial on snowshoe use, and the new, modern snowshoes we have are apparently very easy to walk with. I say apparently because I haven't been on them yet. I don't exactly have great balance. Having said that, though, I've agreed to give it a go this winter as long as it stays above the minus horrible temperatures we've been having lately. We'll take pictures when it happens.

Anyway, here's a little of what I saw in between trudging through snowbanks: 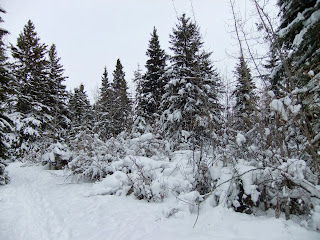 The heavy snow is really starting to weigh down the bushes. I'd imagine that some of them will be permanently bent after this. 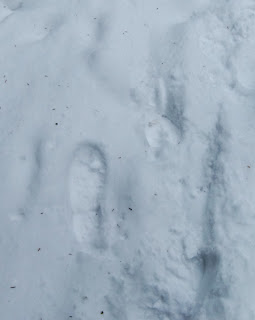 My size 7 boot track compared to a fairly fresh moose track. I don't have terribly big feet, but that was still a good-sized moose. 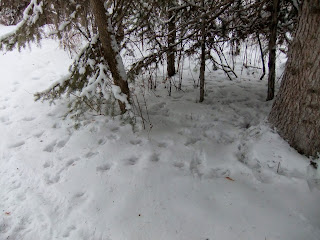 The Red Squirrels have been leaving their share of tracks as well. 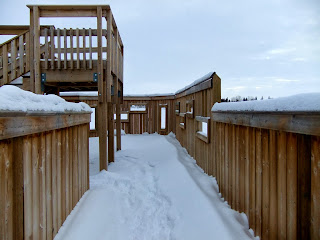 The viewing deck on the West Gaetz Lake is fairly heavily drifted in. It takes a little slogging to get to the deck itself. And then more slogging once you're there. The lake itself is usually an animal highway filled with tracks this time of year, but even there the snow is too deep for most animals to bother trying. Sorry for the colour of this photo, but I had to darken it a lot just to make those few tracks visible.

The trails are still worth a look even with all the snow, and the snow helps us see what the animals are up to. Just remember that if you're not on snowshoes you'll want to plan more time than usual to get places. Either that or plan a shorter walk, of course!