Invasion... of the good kind 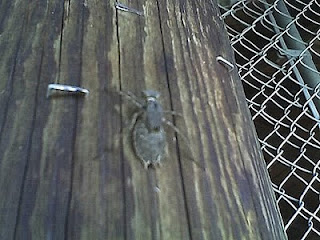 Excuse the fuzzy cameraphone picture, but it was the best I could do at the time.

I was at McKenzie Trail watching a pond study today, and couldn't help but notice that the picnic shelter was being invaded.  Many, many (it will probably be hundreds, by the end of it) dragonfly nymphs were crawling out of the pond and up the shelter.  The students doing the pond study were lucky enough to see several of them split their skins and begin to emerge as adult dragonflies.  Pretty cool demonstration of metamorphosis there, don't you think?

If you happen to be down at McKenzie pond in the next week or so, be sure to keep your eye open for the emerging dragonfly nymphs.  They may be hard to spot at first since they blend in so well with the wooden deck, but once you first see them you'll start finding them all over the place.
Posted by Diane at 1:28 pm

You had a very teachable moment. Good one.